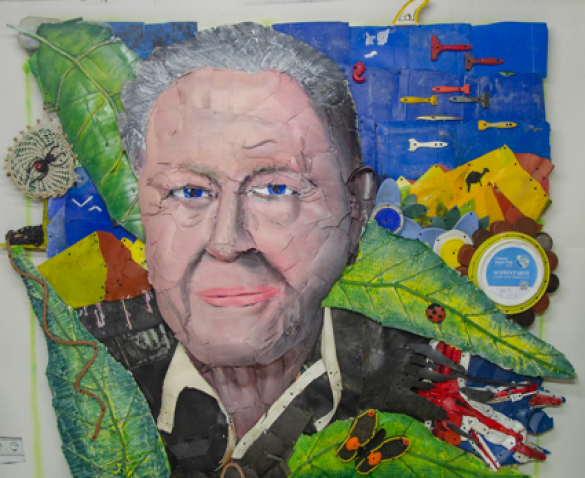 Sir David Frederick Attenborough, was born on May 8, 1926. He is an English broadcaster, biologist, naturalist historian, and author.

Attenborough grew up in Leicester, England, and early developed a strong interest in natural history. He won a scholarship to Clare College, Cambridge, in 1945 to study geology and zoology and earned a degree in natural sciences. In 1952 he completed a training program at the British Broadcasting Corporation (BBC) and became a television producer for the BBC. Together with Jack Lester, in 1954 he originated the television series Zoo Quest, in which live animals were filmed in the wild and in zoos.

For many years his work focused on the wonders of the natural world, but the last 25 have been devoted to supporting environmental causes: restoring planetary biodiversity, limiting population growth, switching to renewable energy, mitigating climate change, reducing meat consumption, or creating more areas for natural preservation, among many others.

Attenborough narrated "Our Planet", an eight-part series that premiered on Netflix in 2019. That year, the BBC also aired its documentary "Climate Change - The Facts", in which it warned that failure to act could lead to the collapse of our societies; In 2020, "A Life on Our Planet"; was described as his testimony and vision for the future.

David Attenborough has written several books and is the only person to have won BAFTAs in black and white, color, high definition, 3D and 4K resolutions. In 2017 with "The Blue Planet II"; he won his first Emmy as a narrator, repeating it in 2019 and 2020 with "One Planet" and "Antartica - Seven Worlds, One Planet".

In 2020, at the age of 94 he temporarily joined Instagram and in just four hours and 44 minutes got 1 million followers and a record for the platform. David Attenborough is internationally recognized as "the great communicator, the peerless educator".  Among many other titles and recognitions, he was knighted by Queen Elizabeth II in 1985 and again in 2020 for his service in television and contribution to nature conservation. He holds more honorary degrees from British universities - at least 32 of them - than any other famous person.

Attenborough was a key figure at the 2021 United Nations Climate Change Conference (COP26). In his speech, he stated that humans "the greatest problem solvers that have ever existed on Earth" and spoke of his optimism for the future, ending by saying "In my lifetime, I have witnessed a terrible decline. In yours, I could and should witness a wonderful recovery".

In 2022, the United Nations Environment Program recognized him as a Champion of the Earth "for his dedication to research, documentation and advocacy for the protection of nature and its restoration".